Monster Energy Yamaha MotoGP's Fabio Quartararo poured everything he had into the Motorrad Grand Prix Deutschland today. Despite having had a tough weekend at the Sachsenring, he managed to achieve a solid 3rd place, earning himself valuable points for the championship. Maverick Viñales tagged onto the back of the group fighting for fifteenth position but struggled to get in the midst of the action. He finished the race in 19th.

The Monster Energy Yamaha MotoGP riders were braced for a difficult Motorrad Grand Prix Deutschland, expecting tyre management to be key, but nobody could have predicted that spots of rain just before the start of the premier class race would add extra tension on the grid. Nevertheless, Fabio Quartararo delivered a cool-headed performance today, took a well-deserved 3rd place at the Sachsenring. Maverick Viñales spent most of the race in a group battling for fifteenth position but couldn’t make strides. He ended the race in 19th. 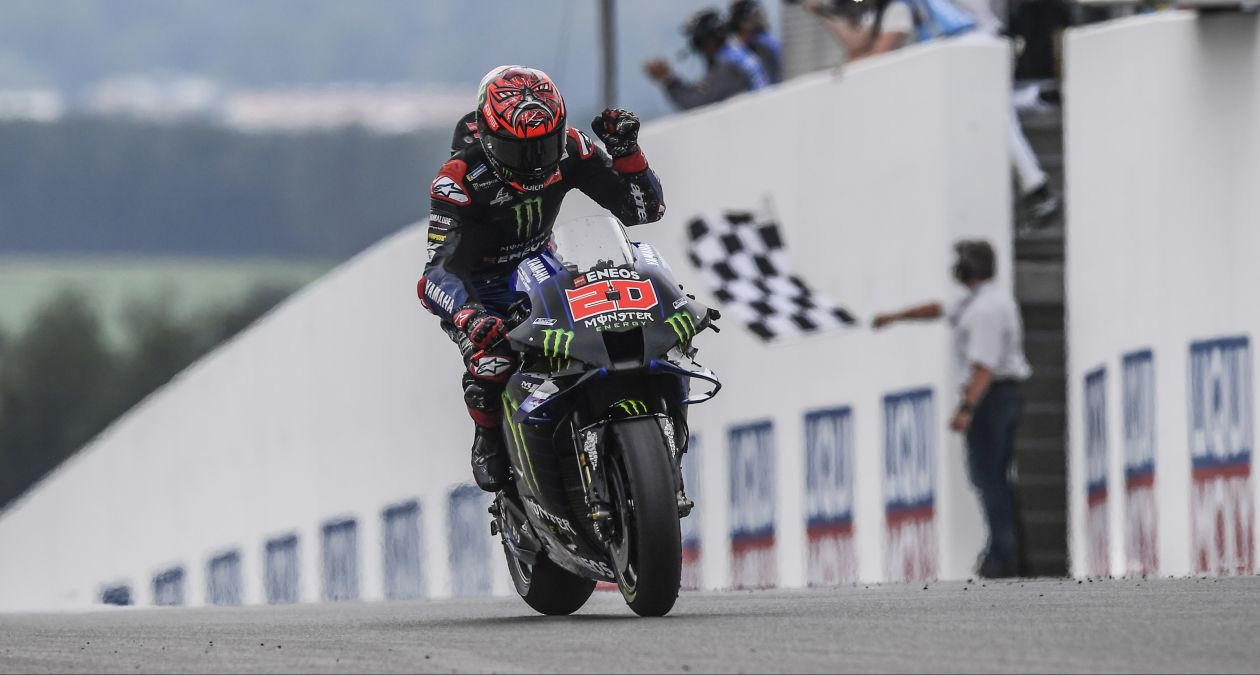 Quartararo had a good start from second but dropped back to fifth as the rider pack dived into the first corner. He then lost another position in the first lap and settled into sixth. Originally the plan was to conserve the tyres in the opening stages to preserve tyre life for the end of the 30-lap Sachsenring showdown. However, nine laps into the race, rain started to fall again, causing many riders to throw caution to the wind and make the most of the slicks while the track was still dry.

El Diablo was quick to overtake Johann Zarco for fifth on lap 10 and found himself at the back of the four-rider group fighting for second place. At the end of lap 17, he overtook Aleix Esparagró. Now the podium was in his sights. Two laps later, he smoothly squeezed past Jack Miller in Turn 12 to take third. With clear space ahead of his M1, Quartararo put his head down, but he was not able to close the gap to the riders ahead of him. He crossed the finish line in third place, with a 6.772s-gap to the race winner.

Viñales had his work cut out for him starting from 21st on the grid at the Sachsenring, the most difficult track to overtake on the MotoGP calendar. His goal was to ride consistent laps and make up as much ground as possible.

After a difficult opening stage, Top Gun passed Franco Morbidelli on lap 13. With three rivals having crashed out, he tagged onto the back of what was a three-rider battle for 15th place. The Yamaha man fought his way up to 17th, but with 7 laps to go a moment pushed him back to 19th place again. However, the Spaniard didn’t give up. He immediately set a red sector in S1, ready to line up an attack on Morbidelli again, but the earlier charge had asked too much of his medium-medium tyres. He completed the race in 19th place, 24.715s from first.